How do I convert time entries to tasks?

I was wondering if it’s possible to convert time entries to tasks. These time entries have been created using the Firefox plugin extension (ie, by filling the description “What are you working on” and then selecting a pre-existing clockify project). So far the plugin enables me to create new projects either manually or by letting integrations to create them. However, this is not the case for tasks. Does this feature already exist? If yes, what are the necessary steps to create a task from a time entry?

At the moment, if I go to the Project’s Status panel, these time entries are grouped under the Tasks with the name “Without task”; and, under Assignees it reads “anyone”. It seems a bit odd because the time entries are created while i’m logged in. I would assume that, by default, a time entry would be assigned to me.

Further, on the Project’s Task panel this task “Without task” does not show up – which i sort of understand because “Without task” is the name for an “umbrella” task that aggregates all the time tracked that wasn’t spent on pre-existing tasks.

I think that manually creating new tasks on the fly from the plugin would be a great feature to have, if it doesn’t exist yet; or, if it’s not possible, converting time entries to tasks from the Reports page could be another alternative.

By the way, using the plugin I time-tracked a card from a Trello board, and while clockify created a new project mapping the board’s name, it did not create a task mapping the card’s name. From the docs, it would seem that this was an existing feature, but perhaps I’m wrong … or perhaps it’s a bug?

Any tips would be greatly appreciated.

It seems that you’ve only created the description on your entries in the ‘What are you working on’ field.
And this isn’t the same category as the Clockify tasks.

add new task1588×596 34.8 KB
in Clockify need to be created from the Tasks tab of a project on the web app. They serve as sub-projects and you need to select from within a project in the Project picker.

What you could do is create tasks within your projects and add them to the entries.
It’s not currently possible to create tasks on the Clockify extension but you can add created tasks via the extension too. 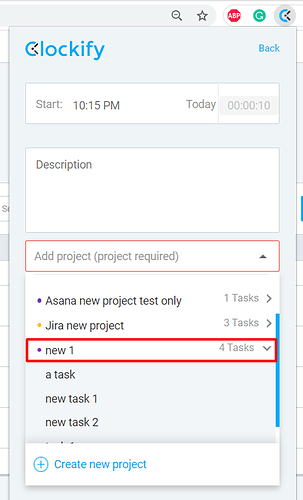 As for creating the tasks automatically from Trello, this isn’t unfortunately available. Currently, the integration can only map and create projects when you start the timer in Trello. But, thanks for your feedback.

Hope this helps. And if you have any other questions, let me know.

Thank you for clarifying this Jane. And bummer that we can’t create tasks from the plugin yet