A few ideas for the free version

After using the free version for about 6 months give or take, here are the top things that I find distract or take extra time out of my day.

For example, let’s say I start a project timer, but 3 minutes in I get a phone call about another project. I have to stop this timer and begin another one. The phone call lasts 10 minutes. Now I start the other timer again. I end up with these little 3 minute and 5 minute time entries all day long which are really annoying to deal with. All I want to do is click the “play” button from project to project and track a single counter. I hope this could be something to allow in the free version, as it’s really making the timer more basic in nature.

In other words, it makes sense in my mind to allow single (free) users to have all the features of entering time for themselves, and save the paid features for companies that use this for managing workers and multiple people.
This is just a thought, but really I could not justify $10 a month only to get rounding for example. That should just be in the free version by default, and instead have people pay for multiple-user abilities and other corporate features.

Thanks for your consideration and a great tool so far!

Thank you so much for the feedback and welcome to the Clockify forum, Zack! I’ll try to respond and provide more clarity for each of your raised points as best as I can.

So based on your needs, Summary report is the way to go. 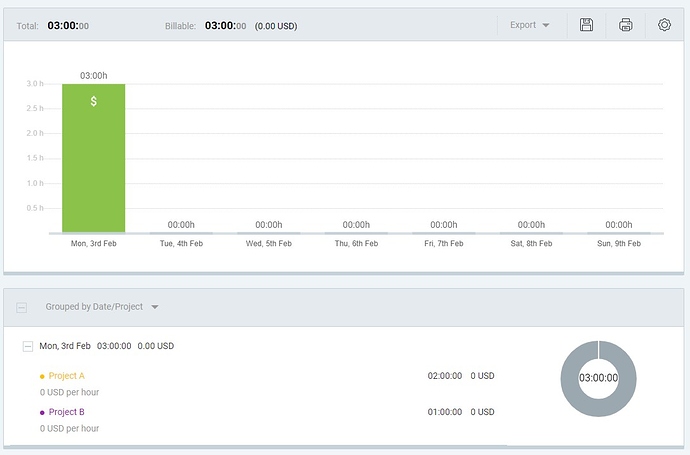 Thanks again for such extensive feedback, we really appreciate it!

Thanks for the detailed followup. If you’ll permit me one more round

The mobile/desktop apps are designed to be really simple and focus specifically on time tracking so their purpose is to make time tracking more convenient.

This makes perfect sense, but the keyword here is “convenient”. I work for a few agencies, and most of the work they send me are project-based, and they want me to invoice them based on projects. So I create on-the-fly projects all the time. But because the hourly rate isn’t entered, this means I have to go in the dashboard constantly to update every new project one by one, or just ignore doing that and loose all ability to make the income reports useful.
So basically, it’s entirely NOT convenient to leave this one field out when creating projects. Either I have to do a lot more work going in and entering this bit of data, or ignore it and leave an entire part of the app and reporting useless.
And it’s very easy to accidentally miss one or two projects that don’t have the income value in there. Considering item #2, without bulk edit, it’s also very inconvenient trying to edit more than one project at a time.
I don’t think it would really take away from the simplicity of on-the-fly project creation just to include the rate field. It could always be ignored and left blank if people didn’t use it.

Further, even if I were on the paid version, this is still inconvenient as I still have to go into the web dashboard and find all my projects with the field missing, in order to do a bulk edit. And different projects have different rates, so I can’t edit every one at once anyway.
I’m all for finding ways to be more efficient and save time, and right now, whether free or paid, this small detail wastes a lot of time, and even leads to entire parts of the app/reporting to be ignored because it’s too much hassle to keep up with manually editing the field later.

For #2, another idea would be to simply remember my last filters so that if I click the back button it just goes to the same view/list I had. But instead it completely resets the page. Remembering filters could be an easy-button fix.

For #3, I understand what you mean. Again this is all about convenience and efficiency.
If I work on 6 projects in a day, I don’t want to pull reports for all my clients and have to go in and get summaries from the dashboard. All this could be done with a glance at the desktop app and I’d be done without wasting a ton of time. All I need to see is “Project 1 — 1:45” and then I update my notes without going to the dashboard or pulling reports, etc.
For example, just today this morning I started a project, only to get hit with their service requiring 2-factor auth. So I had to text them and wait for the code, but they didn’t get back to me. So after a couple minutes I switched to work on another project. But then they got back to me, so I switched back again. Then switched again when done with that.
This kind of 5 and 10 minute switch around happens all day. I seriously hate seeing little 4 minute and 7 minute time entries cluttering up the UI. All I want is the rollup in the UI. Even if you made it so that by default I see the rollup, and then there is a little dropdown arrow or something to see each individual start/stop time, that would be fine. All that matters is that the UI shows the summary.
Toggl does this: 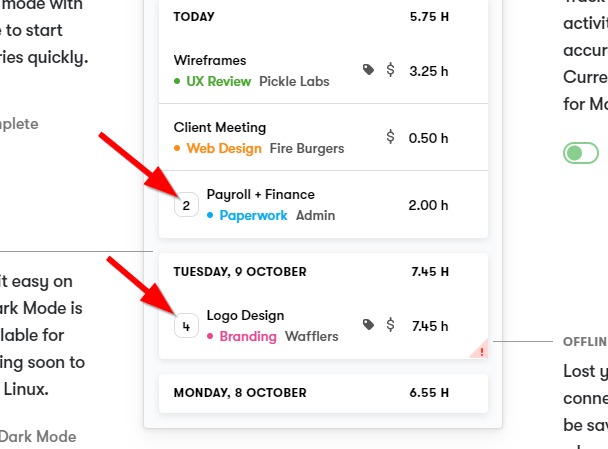 On that same note, I very often begin a task later. For example a client calls me, I start talking to them for a bit and then realize this is part of a project or they want it to be clocked. I turn on a timer, but it’s 10 minutes later than it needs to be. When I’m done with the call. I have to stop the timer, edit the beginning time. But then I might have more to do, so I start the timer right back up again, creating another entry in the UI.

I can’t stress enough, this one little thing about not having rollup is reason enough alone to consider going back to Toggl. Not because it’s a better or worse app, but just because it presents the rollup time entries which is all I need to bill my clients on their projects. Without having to log in to the dashboard and pull reports, which is a daily chore, and it would add up at the end of the month.

I also need to stress, my suggestions aren’t because these things can’t be done in some way. I can also get into my car by opening the trunk and climbing through to the driver’s seat, but that doesn’t mean we shouldn’t have a door there.
These things would save a lot of time and frustration by making daily tasks easier and faster in the app. And that’s what matters, efficiency, convenience! Not simply that is can be done in a roundabout way somehow.
This is a time tracking app, I don’t need to spend ANY extra time in here if possible. All I want is to click start and stop a few times throughout the day and then write down a number. So in some way, I’m asking to make the app simpler, not more complex

Glad to hear from you again, Zack!

As I mentioned, the desktop/mobile apps were designed to be convenient specifically for time tracking (start/stop the timer, enter time manually), while project creation and set up fall more under project management. Previously, it was not possible to create a project from desktop/mobile apps but based on user’s feedback we decided to add this quick option. Also, project rate is one of 4 types of hourly rates in Clockify, which one would be most convenient to add via mobile/desktop app would most likely depend on the user’s workflow.

However, we hear you and I can see why this would be useful in your workflow. While we haven’t had a similar request yet, if other users also report such need we’ll definitely take adding project rate into consideration for the future development.

For #2 Saving filters wouldn’t be optimal in the technical sense. So for optimization purposes, we decided to go with option to open the project in the new tab/window.

For #3 This refers back to what I said about having “Group similar time entries” enabled. This type of time entry grouping is what we do in our web version, macOS, iOs and Android app, unfortunately, the Win app is just not there yet, but we plan to add grouping there as well.

On that same note, I very often begin a task later. For example a client calls me, I start talking to them for a bit and then realize this is part of a project or they want it to be clocked. I turn on a timer, but it’s 10 minutes later than it needs to be. When I’m done with the call. I have to stop the timer, edit the beginning time. But then I might have more to do, so I start the timer right back up again, creating another entry in the UI.

Hopefully, this helps. And once again, thank you so much for such thorough feedback, we always love to hear what our users think!